I just wanted to make sure the opposing view was represented here.  The OT definately has things I do not understand or pretend to.  But I do understand this: Jesus was asked, which commandment is mos 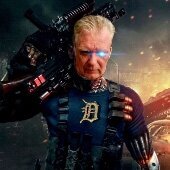 Back in the day I’d be banning people and handing out tickets for shit like this. Now I even say shit. We don’t even have good trolls anymore. The old days were better.

San Francisco put baseball on notice earlier this season.  Heck, it might have been the first series of the season.  They are not going to let down.  They will need to be stopped.  Run differential is